A couple of months ago (yeah, this post is a little delayed…), I decided to play hooky at work and take a day to do some genealogy research.  Bright and early, I set off for the tiny, tiny town of Green Isle, Minnesota. My main destination was the Sibley County Courthouse in Gaylord, but I wanted to stop by St. Brendan’s Catholic Church in Green Isle and tromp around the cemetery for a bit to look for…I dunno…anything? Of course, I was secretly hoping to find the grave of my great, great grandfather, Anthony Maguire (McGuire? I haven’t figured out which is right), but I had no paper evidence that said he was buried here, so I wasn’t expecting to find anything. But prior to this little expedition, I had just finished reading A History of St. Brendan’s Parish, the Village of Green Isle and Minnesota’s First Irish Settlement, which, in addition to crediting Anthony McGuire as the buyer of the town’s first house (a saloon), talks about some of the other Irish families that played significant roles in building the little village.  The O’Meara’s were one of these families, and Anthony’s second wife was Mary Jane O’Meara. I don’t have a complete grasp on all of the O’Mearas of Green Isle (and how Mary fits in with all of them), but I expected to find some of them in this cemetery.  And even if I didn’t find a single thing in Green Isle, I wanted to go just so I could see the town; I wanted to see what my ancestors had built.  So there I was, standing in a small town Catholic cemetery, at 8am, on a very gloomy Thursday morning in May. 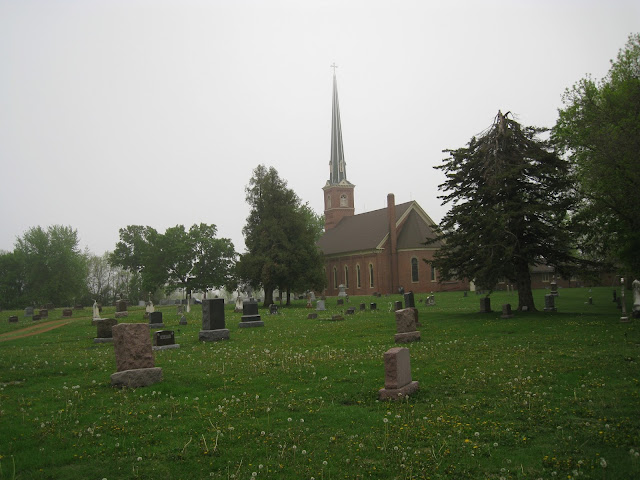 I found a number of McGuire/Maguire stones with names that I did not recognize, and I couldn’t tell you if I am related to them.  I also found many O’Meara stones. One O’Meara stone I was especially happy to stumble upon, because guess who was on it? Mr. Anthony Maguire! Or, McG, as I now like to call him.  And just my luck, his part of the stone gives me no information other than (most of) his name.  His elusiveness continues… 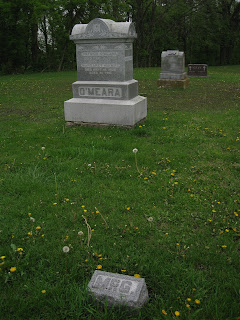 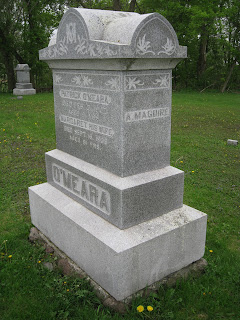 There was a small stone for each person listed on the big stone: Brother, Sister, Father, Mother, and…McG. 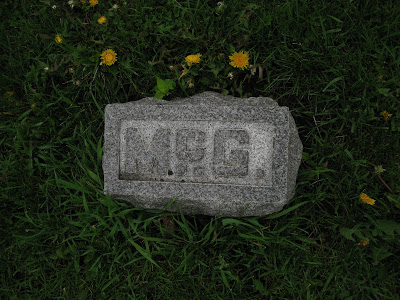 His wife, Mary was on the stone, too.  On the opposite side, along with her first husband, Michael Young. This was news to me – I didn’t know Mary had another husband. But not surprising; perhaps she re-married after Anthony died in 1882.  I needed more paper documents to figure out what was going on here.  But after my cemetery visit, I could add the following to my collection of known information:

And then I was off to the Sibley County courthouse in Gaylord, to find documentation for the McGuires. I was mostly hoping to find birth and death records for any of Anthony’s thirteen offspring.  I found lots of things.  (What follows is a lot of detail that I’m recording for myself, so I have something to look back on when I ask myself things like “How do I know when this person died?  Do I have his/her death record?, Where did I get it? When did I get it?”  Actually, this blog exists exactly for that reason. I can’t imagine I have many (any?) readers that aren’t relatives who find this the least bit captivating.)
I copied a lot more down from those ancient books, but I’m not sure they are all connected to me – so I’m not going to list them here.